Join us for a night full of amazing food, wine, and live music! 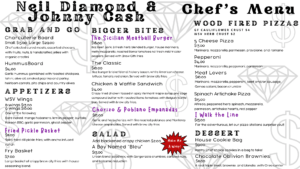 We do not send out physical copies of tickets! All attendees names will be held at the gate. Use the name of the ticket purchaser to get admission in!

The first half of this exciting multi-media theatrical production is “The #1 Tribute to Johnny Cash.” Hear the great “Man In Black” familiar classics including “Ring of Fire,” “Walk The Line,” “Get Rhythm,” “Sunday Morning Coming Down,” “Stripes Around My Shoulder,” and lots more. After intermission, audiences are on their feet during Doug’s dazzling tribute to Neil Diamond featuring his greatest hits, “Cracklin’ Rose,” “Sweet Caroline,” “America,” “Forever in Blue Jeans,” “Play Me,” and many more. This spectacular evening also features The Nash A-List Big Band, great charts, lighting and a stunning video wall highlighting the lives of Cash, Diamond and Nash A country boy at heart, Doug grew up on a farm in northwest Illinois near a town on the banks of the Mississippi River. He began performing in local talent shows at age five; and had formed his own band by age twelve. That same year his parents took him to a Johnny Cash Concert, one of several he would attend over the years. Nash has entertained our troops overseas with the USO, touring 87 countries. A chance meeting at that time with Johnny Cash in a Copenhagen, Denmark airport inspired him to create “The Johnny Cash Tribute Show.” He ultimately added another American icon, Neil Diamond. Nash’s rich baritone just happens to be in the same vocal range as both Cash and Diamond. “Doug Allen Nash ‘channels’ these two American icons.” High praise from Chicago’s top-rated WGN-TV Morning News after a recent guest appearance. Doug captures the essence of both legendary performers in his own style and with his own passion for their music. Nash has the blessing of Johnny and June Carter Cash’s Grammy Award-winning son John Carter Cash who heads Cash Cabin Studios in Hendersonville, Tennessee. It is where his parents recorded most of their later music, and where Doug records his outstanding CD’s. When this ruggedly handsome and gifted singer and musician hits the stage you know you are in the presence of a dynamic star and the consummate showman. Doug Allen Nash loves to entertain and it comes straight from his heart to his audience. Every night’s a party when this captivating entertainer is onstage He is dedicated to keeping the legacies of these two American Icon artists alive. Doug’s enormous gifts as a singer, musician and dazzling entertainer have audiences applauding his showstopping concerts in theatres, resorts and casinos from coast to coast, including the legendary Caesars Palace on the Las Vegas Strip and The Hard Rock Hotel and Casino, Nashville’s Opryland Hotel, and the Taj Mahal in Atlantic City. He was also invited to headline “The 20th Anniversary Johnny Cash Concert” at Hollywood’s famed Viper Room. Nash is also a songwriter and longtime member of SESAC. His song “June” is dedicated to June Carter Cash and was recorded at Cash Cabin Studios under the directions of John Carter Cash. One evening, Nash was watching a PBS documentary about Johnny Cash and touched to hear these words from their son about the Cash/ Carter marriage: “He loved her tenderly.” It inspired Doug to write this beautiful and heartfelt ballad. Doug is a member of the SAR, and always proud to acknowledge that he is a direct descendant of John Hart, one of the 56 signers of the Declaration of Independence. His patriotic spirit is always present during his shows. You’ll see that at every performance. Yes, a country boy at heart! Doug, who was inducted into the “Legends of South Dakota Country Music Hall of Fame,” still has farmland in his native Illinois and heads back whenever his busy concert schedule permits. He also likes to saddle up in his cowboy hat, boots and jeans for a trail ride.

In the event of rain, we will move the concert indoors.

When indoors, the concert seating will change to long tables of seating with a small dance floor. We will keep group reservations together, however, other groups may be seated on either side of yours. If we do anticipate rain, through local weather channels, we will be limiting the attendees to a total of 200. The first 200 purchasers of covered patio tickets and reserved tickets will be able to attend. Everyone else will be able to transfer their ticket or receive a refund. You will be notified through email and/or a phone call with your options. The decision to move indoors will be made TWO days prior to the event.

Due to the ever-changing weather in Houston, there may be an occurrence of moving indoors last minute.  If this is the case, we will (1) seat the season pass/covered patio/reserved ticket holders in the chronological order that ticket reservations were made online, (2) general admission will either be seated on the covered patio or in extra seating indoors.

These decisions are made based on the variables of each concert. Refunds may be given, but no refunds will be processed once the main event has started.