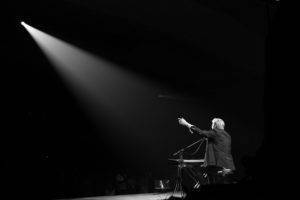 Join us for our first ever Christian Concert!!!

Don grew up in Minnesota before moving to Tulsa, Oklahoma, to attend Oral Roberts University. There, his musical gifts caught the eye of Terry Law, who asked Don to join his worship team, Living Sound, which ministered in communist countries throughout Eastern Europe and the former Soviet Union. For 10 years, Don was responsible for much of the group’s arrangements and musical productions, and saw first-hand the power of praise and worship to open closed doors and hearts, and lead enslaved people into the presence of God.

In 1984, Integrity Music asked him to lead worship on one of the first Hosanna! Music albums, Give Thanks. The project became one of Integrity’s most popular recordings ever and a benchmark for the genre, achieving gold certification status and now nearing platinum certification.

Don eventually joined the staff of Integrity, and served as President of Integrity Music and executive vice president/creative director for Integrity Media. In these roles, he spoke into the production of hundreds of products including all of the CDs and worship resources produced by Integrity Label Group. As an artist in his own right, Don has sold over five million units.

His discography reflects his passion to create resources for the church that lead people into an honest and intimate relationship with the Lord. In 2002, his peers recognized that lifelong commitment and

presented him with the Ray DeVries Church Ministry Award.

Don has also received a Dove Award for his work on the musical “God With Us” and has received multiple Dove Award nominations for his songs, CDs and choral resources.

In addition to his writing and recording, Don makes time to tour domestically and abroad and has performed with artists such as Chris Tomlin, Twila Paris, Sara Groves and Paul Baloche to name a few. He also has served as worship leader for past National Day of Prayer events and as a music industry spokesperson, having been featured on Fox News, NPR and in USA Today.

Don is as popular overseas as he is at home in the U.S. His travels for concerts and seminars have taken him to Ghana, South Africa, Singapore, the Philippines, South Korea, Brazil, Canada, Australia, Great Britain, Hong Kong, Malaysia, Indonesia, Japan, Guatemala, Honduras, and elsewhere.

Today, Don is President of Don Moen Productions in Nashville, Tennessee, where he resides with his wife Laura and five children

In the event of rain for any of our outdoor concerts we will move it indoors. The indoor concert seating will be more like a listening venue with a small dance floor and long tables of seating.  We will keep group reservations at the same table, but other groups may be seated on either side of you at the same table.  If we anticipate a rain out, thru local weather forecasts, we will limit our reserved seating to 200 guests. In this case, all general admission ticket holders will receive refunds.  However, with the ever changing weather in the Houston Area, we might be forced inside at the last minute.  If that is the case we will 1)  Accommodate the reserved ticket holders in the order that the reservations were made online, 2) if there are any available seats after the reserved seating is accommodated, some general admissions might be available to be seated on the patio or in the tasting center.  This will be decided on an event by event basis, depending on the number of reserved seats that are sold by the cutoff time on the Friday before the concert.  As always if you are not satisfied with your seating you will receive a full refund at the start of the event only.  Once the main event starts, no refunds will be given if you have an assigned seat.
+ Google Calendar+ iCal Export